The rainbow trout (Oncorhynchus mykiss), is one of the most respected and sought after of Alaska’s native game fishes. Serious anglers from the world over are drawn to Alaska to experience the thrill of challenging this hard fighting salmonid in the state’s wilderness waters.

Rainbow trout occur as both freshwater resident and sea-run races. Sea-going rainbows, known as steelhead trout, are discussed in a separate Wildlife Notebook Series account.  Kenai River Rainbow Trout are among the biggest in the world and the fall fishery is amazing.

Rainbow trout are native to waters throughout Southeast Alaska west to Kuskokwim Bay, and as far up the Kuskokwim River as Sleetmute. The clearwater lakes and streams draining into Bristol Bay provide outstanding habitat. Rainbow trout occur naturally on the Kenai Peninsula, throughout the fresh waters of Upper Cook Inlet, on Kodiak Island, and in the Copper River drainage. Release of hatchery-reared Alaska rainbow trout has extended the range of resident rainbows to specific lakes and streams in the Tanana River drainage near Fairbanks.

General description: Rainbow trout possess the well-known streamlined salmonid form, though body shape and coloration vary widely and reflect habitat, age, sex, and degree of maturity. The body shape may range from slender to thick. The back may shade from blue-green to olive. There is a reddish-pink band along each side about the midline that may range from faint to radiant. The lower sides are usually silver, fading to pure white beneath. Small black spots are present over the back above the lateral line, as well as on the upper fins and tail. In some locations, the black spots of adults may extend well below the lateral line and even cover the entire lower side. Rainbow trout are positively identified by the 8 to 12 rays in the anal fin, a mouth that does not extend past the back of the eye, and the lack of teeth at the base of the tongue. River or stream residents normally display the most intense pink stripe coloration and heaviest spotting followed by rainbows from lake and lake-stream systems. Spawning trout are characterized by generally darker coloration. 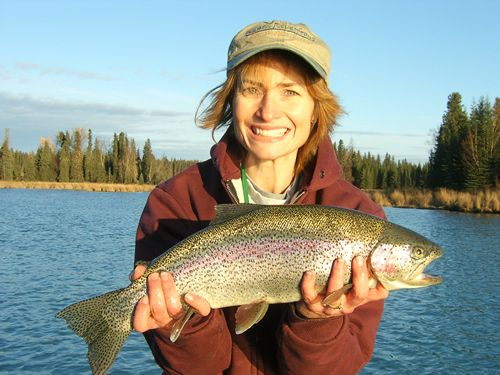 Life history: During late winter or early spring, when water temperatures are on the rise, the maturing adult rainbows usually seek out the shallow gravel riffles or a suitable clearwater stream. Spawning takes place from late March through early July, depending upon the specific location and the severity of the winter. The female uses her tail to prepare a redd, or nest, 4 to 12 inches deep and 10 to 15 inches in diameter. From 200 to 8,000 eggs are deposited in the redd, fertilized by a male, and covered with gravel.

Hatching normally takes place from a few weeks to as much as four months after spawning, depending upon the water temperature. A few more weeks may be required for the tiny fry to emerge from the gravel. Upon emergence, the small trout assemble in groups and seek shelter along the stream margins or protected lake shore, feeding on crustaceans, plant material, and aquatic insects and their larvae. Rainbow trout rear in similar habitat for the first two or three years then move into the larger water of lakes and streams and turn more to a diet of fish, salmon carcasses, eggs, and even small mammals.

Age of onset of sexual maturity varies markedly between individuals due primarily to such factors as population density, productivity of the aquatic environment, and genetic makeup. In the wild, male and female spawners as young as ages 3 and 5, respectively, have been found, but a majority of both sexes mature at age 6 to 7. Spawning frequency ranges from annually to once each three years. Rainbow up to age 11 have been observed spawning.

Among resident rainbow, those living in or migrating to large lakes with sockeye salmon runs generally grow faster and larger than fish which remain year round in streams.

Fishing: Fishing success is typically greatest in the spring and fall, that is, before and after the large salmon runs. Rainbow trout are voracious feeders and strong swimmers willing to hit a wide variety of lures, baits, and flies. Weighted spinners are preferred by many anglers. The wobbling spoon is another fine rainbow getter. Fly fishers find that streamers, muddlers, and egg patterns fished near the bottom can be depended on to do the trick; black and red, especially fluorescent red, seem to add something of value.

Alaska manages rainbow trout fisheries for the health of the species and for a diversity of recreational angling experiences. Wild trout are abundant over most of their range, but daily bag and size limits are intentionally conservative. Artificial lure-only regulations are commonly used to reduce angling mortality. Many of the heavily fished waters are closed to trout fishing during the spawning period to further protect these valuable fish. Specific trout waters have been designated catch-and-release or trophy fisheries to help enhance the quality of the fishing experience or preserve an abundance of large fish. Anglers who wish to take rainbow primarily for the pan are encouraged to visit one of the hundred or more lakes stocked annually with Alaska rainbow trout.