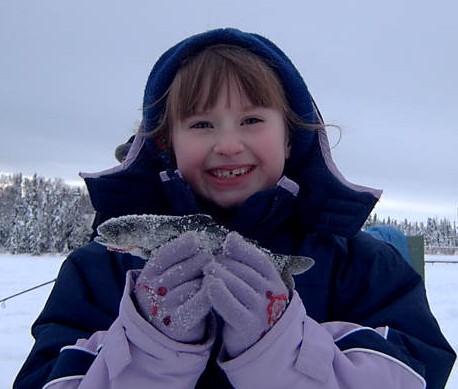 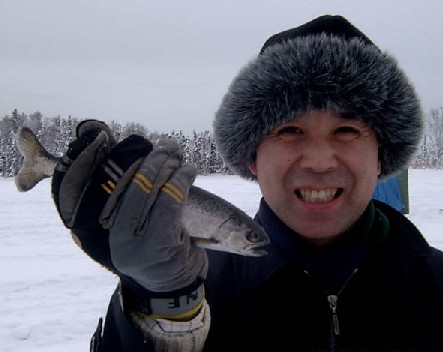 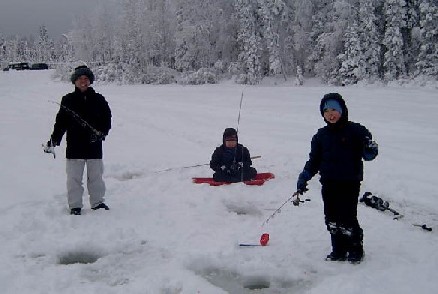 Nice Silver on the Riverfront!

“…the Silvers have been coming in nicely for several weeks now, and this nice one was caught by Arima-san from Tokyo, Japan! He enjoyed fishing the Riverfront for Silvers, Rainbows, & Dolly Varden (Iwana) and even enjoyed some nice fresh sashimi during his visit! 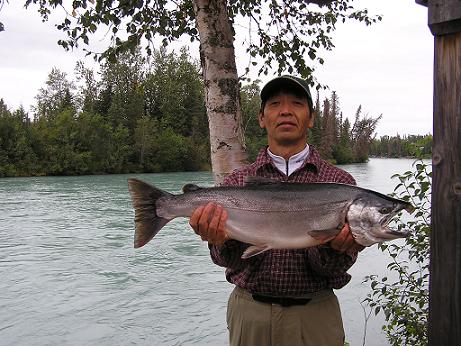 “…here are just a few of the many beautiful, bright chrome Silvers (Coho Salmon) that the Itaya family of Tokyo, Japan enjoyed during their first visit to Alaska! Everyone in the family caught fish and enjoyed a wonderful time on the Kenai! Come back soon :). 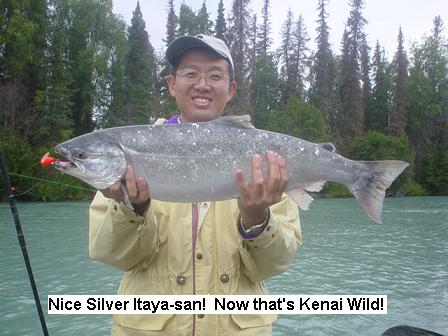 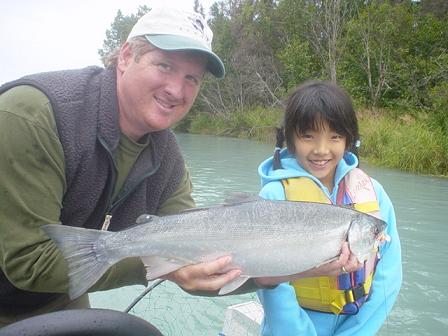 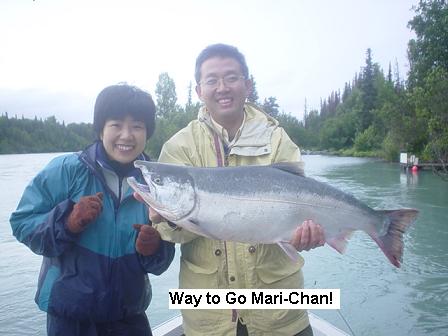 “…The Kenai continues to prove itself as the #1 Hotspot for King fishing. Several nice bright Chinook in the 40 pound range, a couple of monsters in the plus 60 pound range that got away, and this beautiful 50 pounder that Cindy fought hard on the last day of the season! After a slow period of fishing, this King hit her eggs like Andre Agassi hits a tennis ball, and Cindy was on the bow dancing with a doubled over fishing pole! This fish went in the net nicely after a good fight, and it was picture time on the bow of the Green Dream! She held the fish up high for a long time while Jim reloaded the film, and more pics like this one were taken back at the fish table. Look at that Colgate smile! 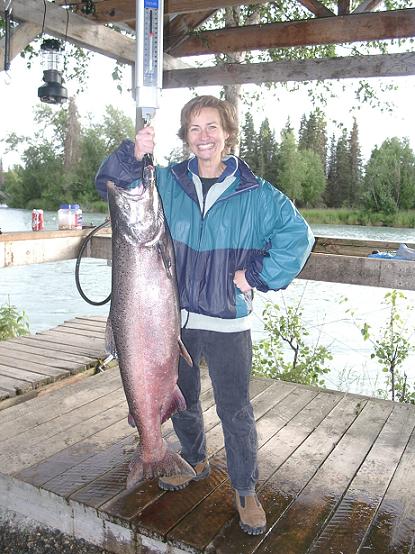 “…and what a fight it was! Kincade’s goal for the 4th of July weekend was to catch a King before his Dad did, and he accomplished that and a whole lot more! He hooked this nice chrome beauty just upriver from the house, and wrestled it a good ways down river, occassionally bellowing at the monster King to try and force her into submission. With the energy, strength and agility of an olympic gymnist, this King jumped into the air several times, evaded the landing net, swam under the boat, and made strong runs upriver and down before Kincade finally won the battle. “ 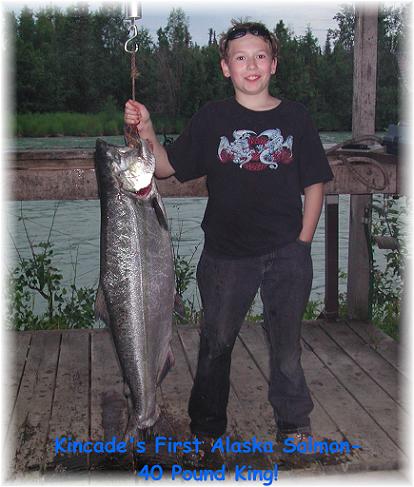 “…dressed in pink and ready to dance! Cindy’s first King of the season was a handsome buck, who made the mistake of biting her line. It might have been her matching jacket that attracted him and lured him into the “river dance”. In no time at all she had him on the deck, and now he’s in the smoker! “ 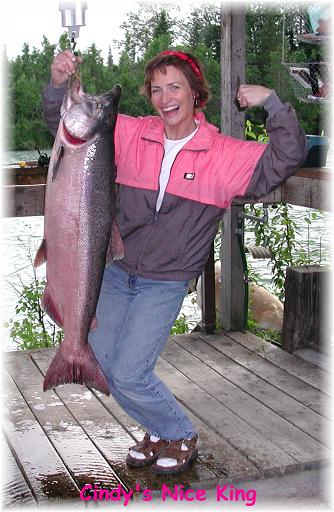 Fish are Jumping in the Boat!

“…we’ve all heard the expression, but this was for REAL! On Tuesday night, just minutes before midnight, my good friend Keith Randall landed his first King Salmon. Well, sort of. The salmon actually landed itself, right at Keith’s feet at the bow of the boat. We had been fishing for just an hour or so, in a heavy downpour of cool rain, and we had lost a couple of Kings that struck hard but wouldn’t take the hook. It was our last pass, time to hang it up, so I put some fresh eggs on our spin-n-glo’s and dropped them just upriver from our house. At the end of the drift, Keith’s pole doubled over and he set the hook into the jaw of his first Kenai River King Salmon. The fight was splendid, with this big King showing his color several times as he jumped full body out of the water. I told Keith it was a shame that no one would be on the beach to watch us land the first King ever to be netted in front of our property, but as I went to put the net in front of the fish’s head that 50 pound King Salmon JUMPED OVER the net and OVER the side of the boat onto the deck at Keith’s feet, knocking him backwards and sending us into a frenzy chasing this big beast that was now frantically swimming around the deck trying to find his way back into the river. Amidst laughter and cheers we eventually subdued the incredible fish, which tied the record for the biggest fish ever caught on our boat. Nice job Keith, not a bad start to your King fishing experience.” 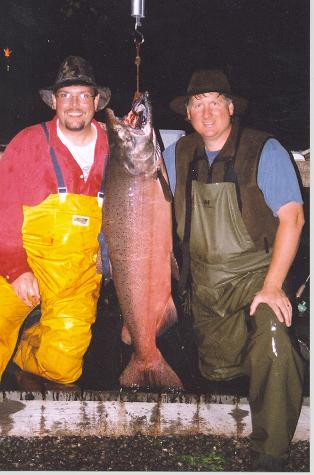 “…on one of the hottest days of summer so far, in the middle of the heat of the day, our 9 year old daughter Jillian landed a beautiful King Salmon, her first of the season and her biggest fish to date! Grandma & Grandpa Nelson, along with her sister Allison and Dad were all on board for the excitement. Dad was video taping the river scenery and Alli was sleeping when Grandma said “What’s that? What’s that? Dad helped Jillian get the pole out of the holder, and the battle began, and ended in her favor with a beautiful fish in the net. Jillian handled the pole with great skill and concentration, while Dad netted the fish next to the motor! What a great day on the water…followed by a great meal too!” 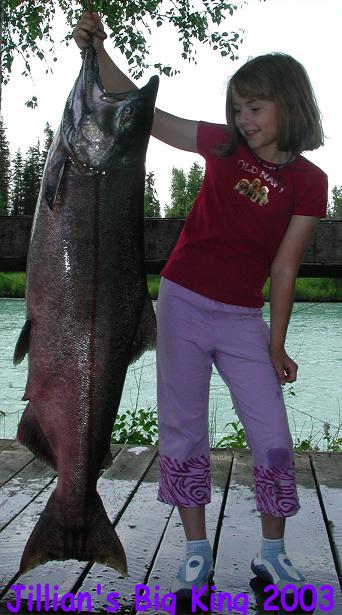 “…under rainy skies and above a river filling quickly with King Salmon, Allison, our delightful 6 year old daughter, hooked into her first Kenai River King Salmon today…a dream come true…especially for Dad!  It was the typical melee on the boat, with the fish going downriver fast, then upriver, then under the stern, under the bow. Big sister Jillian helped hold her in the boat and keep her tip up.  The fish hit on the same favorite plug that landed the first ever King in our boat in 1999 by Grandpa Nelson, making it even more memorable.  Earlier in the day we had a mechanical issue with the reel, a loose screw, followed by a snag in mid river, then BAMMMM, the King hit that plug like a missile and the fun had begun. Here’s the photo to prove what a beautiful girl and fish we are lucky to have!”

“The new month started with a bang (and a bonk or two!).  We landed two nice King Salmon this morning, within site of our front yard, under nice partly sunny skies.  The water has been very low in the river so far this year, but the fish are increasing in numbers, and we haven’t run out of props yet!  Two other Kings were landed by clients in our RV Park this weekend, so the month of June is off to a nice start.  We enjoyed Salmon sashimi and campfire smoked salmon ribs with friends today, and we’re ready to out after more fish during the quiet part of the week.

No real sign of the early summer Hooligan (smelt) run up the river yet. A few splashing here and there, but not in real catchable numbers yet.  Kings on the Kasilof are picking up, and a few sea bound Steelhead have been caught and released too.

Remember, no power boat fishing on Mondays during June & July, and no guided fishing trips on Sundays.  Look forward to seeing you at Kenai Riverfront soon!” 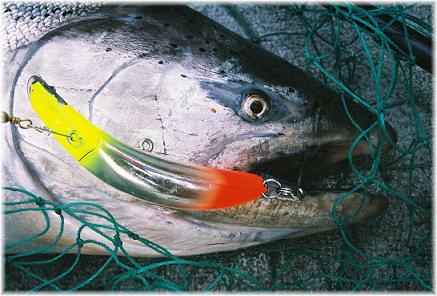 “First trip of the season out of Deep Creek into Cook Inlet for the big white fish (not to be confused with the little white fish known as walleye that I grew up with), and it was a great day on the water with Silver King Charters.  A boat full of Halibut and one big fresh King Salmon.  Dinner was good tonight!  Kings are also showing up here in the Kenai River, we’ve seen some roll, and we’ve dropped a few plugs in after them, so we should have the first of the season pretty soon.  Kasilof River Kings are getting active and growing in numbers too, so that means drift boats will start trips down the Kasilof for a relaxing float and fishing.  Lake fishing for Dollies and Rainbows has been good and we should start picking up some trout in the river too.”

Let us know if you want us to book a salmon or halibut charter for you soon! 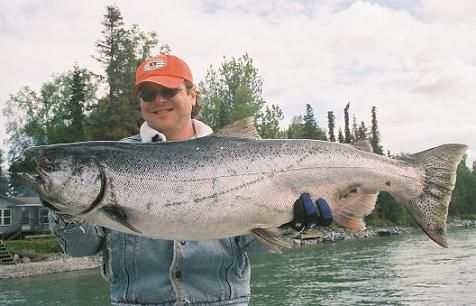 Also check out www.alaskaoutdoorjournal.com for up to the minute reports on fish counts, water temperature, water visibility, guide reports, and private angler reports.