“…it’s been a tradition as long as I can remember now, at least as long as we’ve had kids, and they didn’t let me down this year either.  They produced a very nice Rainbow Trout as my annual “Father’s Day Fish” and we all enjoyed the moment of togetherness, or Jatkavutta as the Finnish would say.  Allison caught this one, quickly followed by another!” 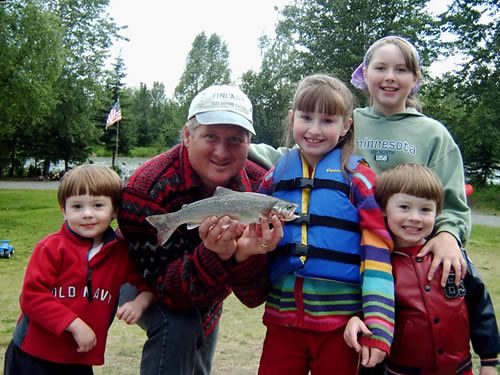 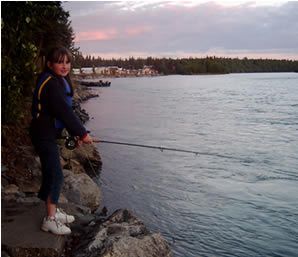 “…rain, rain, and more rain.  It started last night, and by morning we were drenched.  Still, with an emergency opening allowing bait to be used for King Salmon fishing nearly two weeks ahead of schedule, we couldn’t resist an early morning on the water, or should I say IN the water.  Even though it was my wedding anniversary, and we had a full Saturday of work planned, we still managed to boat 4 Kings in no time at all.  Kathy landed this first one, a beauty, and her first Kenai King victory…way to go!  She was quickly followed by her son Michael with his first Kenai King, and then my daughter Jillian (Alli passed on her chance to keep her tag open for July) and Kathy’s husband Mike boated the final King of the morning.  What a great start to summer, FISH ON!  I better go buy flowers now…and get to the work.” 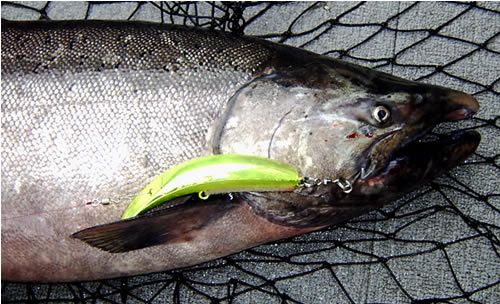 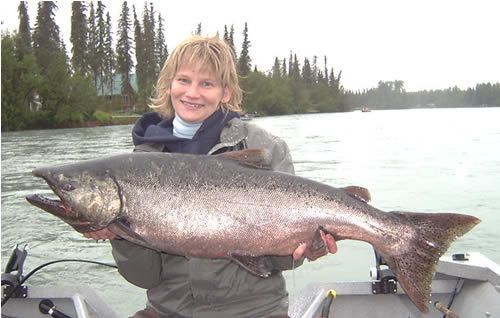 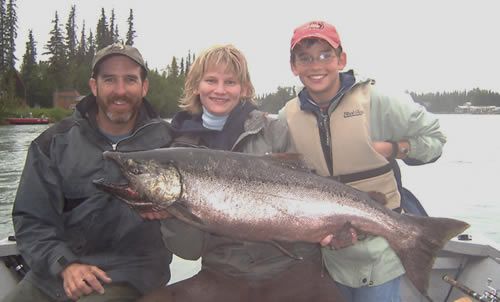 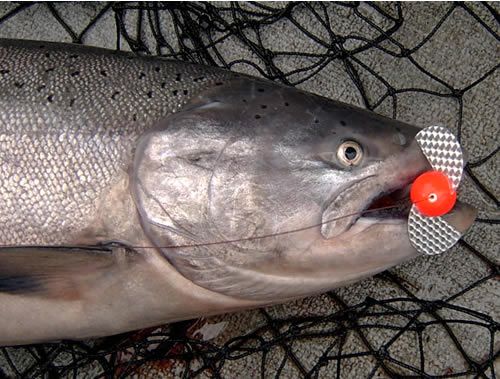 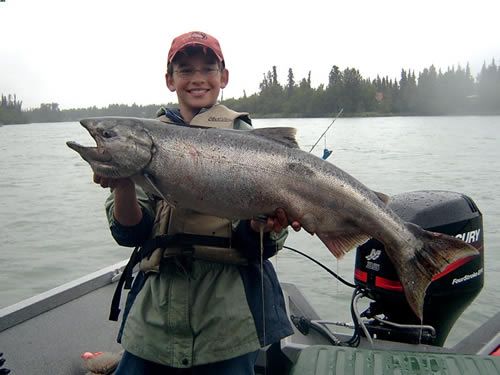 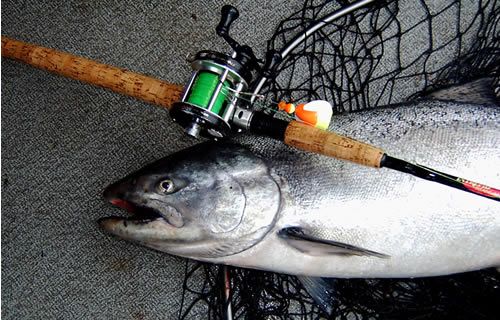 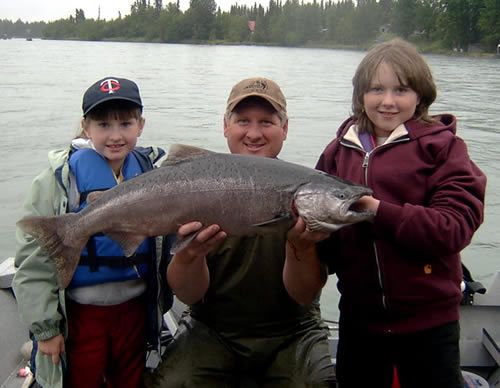 “…proving she is a natural once again, Queen Allison landed her first King of the season, finding a sweet spot on the Harry Gaines backtrolling stretch of the Kenai.  She set the hook and fought the fight, prevailing once again as a Queen of the Kenai landing her King!” 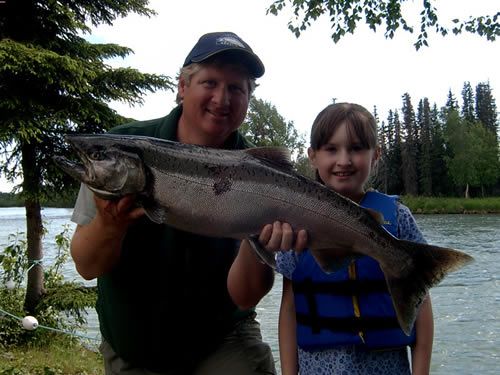 “…fishing on the Kenai continues to heat up!  One of our best friend’s Mom travelled a long way to find this Kenai King lurking in the waters around Sunken Island.  It was a great fight and created some wonderful Mother/Daughter memories.” 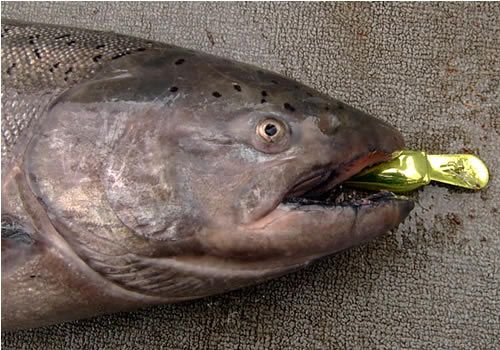 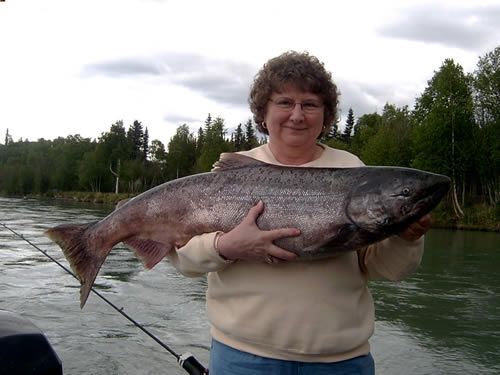 “…the screams of happiness would have made you think someone was drowning when she landed this beauty of a Kenai King, her first King, and her first big fish!” 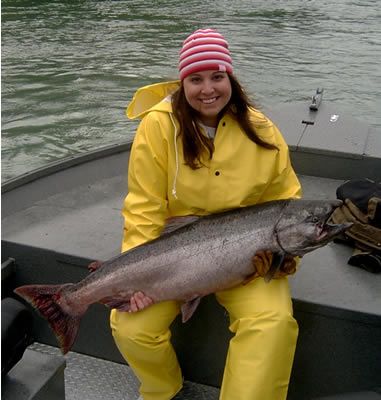 “…they arrived from stateside with high hopes, and the Kenai River didn’t let them down!  The Graves family, minus their Mom who stayed home to hold down the fort, had a great day of fishing on the Kenai River with a local guide.  While the girls had the upper hand of lady luck, the son is the one who landed this beautiful Chinnook, the first to grace our shore this summer….time to get on the river!” 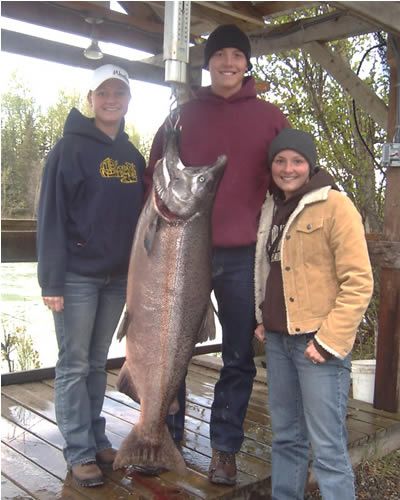 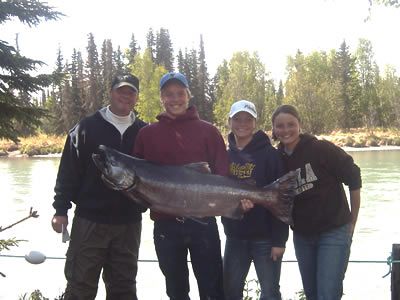 “…a big day for our 1st child!  Jillian, age 11, landed this beautiful buc, her first in Saltwater, out of Deep Creek fishing with friends.  She was focused and confident as she reeled and managed this fiesty king.  He tried to make a run for the prop, but the Captain helped her move quickly to the port side and save the fish.  She was all smiles….all day long, and that’s a long day this time of year in Alaska, nearly twelve hours on beautifully calm seas, and still home before dark.  Her buddy Michael caught a nice halibut too, it nearly outweighed him, and the boat finished with a limit of halibut (12) and 2 nice Kings.  Let the fish frys begin….” 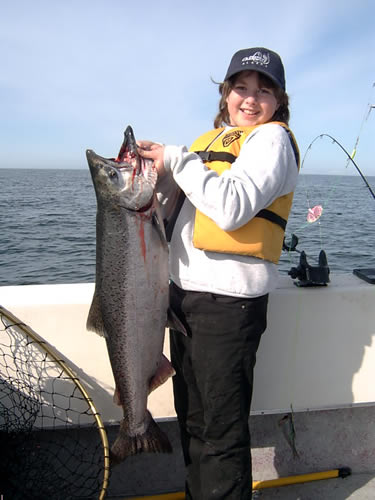 April 2005–Headwaters of the Kenai River

“…the end of April has brought record high temperatures to the Kenai Peninsula, into the high 60’s and low 70’s at times, and summer is fast approaching.  The lake ice is all but gone and the Rainbow & Dolly fishing is picking up as they begin thier spring feeding ritual.  I took a short trip up to the headwaters of the Kenai River at Kenai Lake and spent a nice morning drowning flys and watching Rainbows rise.  Caught some nice pictures and saw one nice Rainbow landed, photographed and released to go and spawn freely.  Fished downriver a bit as well, with ducks doing flybys and the sun warming the riverbed.  What a simple pleasure to get out and enjoy the beauty of our backyard.” 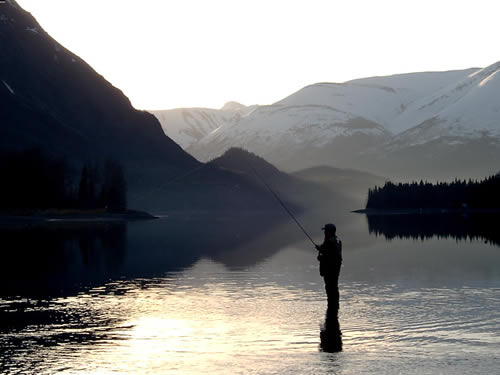 “…summer can’t be far away now!  The Eagles flocked up this evening on one of the last remaining crusts of ice on the riverfront, keeping a “keen eye” on the river for some fresh fish.  It wasn’t long before the largest of more than ten Bald Eagles found dinner…a nice trout, shared by all, though not without a few squabbles first.” 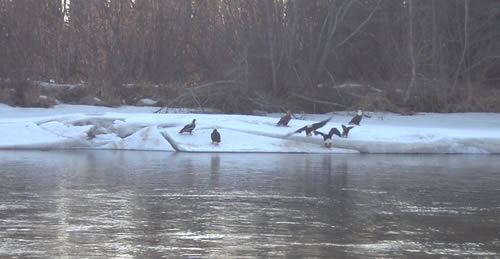 Let us know if you want us to book a salmon or halibut charter for you soon!

Also check out www.alaskaoutdoorjournal.com for up to the minute reports on fish counts, water temperature, water visibility, guide reports, and private angler reports.