“…opening day for King Salmon fishing on the Kenai River is a special day, and thanks to my father-in-law “Doc” sharing his boat with us we could enjoy getting out on the water doing one of the things I love most. Opening day this year was even more special given the closure of the first run of Kings in June for the first time in years–keeping us waiting nearly 2 months longer than usual to get our King gear out, rigged up just the way they like it and in the river where it belongs.   0445 Alarms for the three fishers, 0500 on the water under perfectly blue morning skies, the sun just peaking through the trees.  First pass down our favorite run and a quick hit & miss at the bottom, just enough to get our blood pumping.  My buddies from Switzerland, Claudio and Remo, could hardly contain their excitement.  I think Claudio was shaking a little from adrenaline rushing through his veins the moment we dropped the lines in the water. We only had time for a couple runs, but as luck had it that would be all we needed. Halfway down the run it happened, like slow motion in hyper speed, the outside pole bent hard and line started screaming off the reel. Claudio jumped out of his seat not needing an invitation, grabbing the pole he came up hard with a single hook set like he’d been doing it his whole life. It was his first. His only.  The boat was on fire now, Remo and I scrambling to pull the other poles in, prepare the net and somewow keep the boat straight while flanking out of the strike zone so we could take up the fight. We passed the first test, poles in, net up, with the boat in a good position clear of other boats.  From cheers & laughter to calm and focus Claudio went to battle with the fish which I could tell pretty quickly was a good sized Kenai King ready to challenge us.  Other than the initial splash when we set the hook, this King didn’t show itself, no jumping, so surface action, a tell-tale sign of a big King.  It raced upriver a couple times and we had to chase it down, it raced across the river and gave us a panic with other boats running up. Claudio just held on at times, unable to reel up until the fish turned and ran and gave him slack. The fish came close to the boat once early on in the fight and I thought I might have a chance to net him, but he never came up and screamed up river again.  That’s what salmon do. Upriver is the direction they know. After a few big runs this King came back to the boat thanks to Claudio’s calm perseverance, but then it was almost over in a second when the fish ran under the boat to the other side and back across the bow. Claudio’s arm was in the water with the pole fully submerged, keeping the line from ever touching the aluminum hull of Doc’s boat. Later he’d share that his arm was also aching from the fight already. A couple more runs under the boat and finally this beautiful King showed itself, coming to the surface for just a second, causing a wave of cheers from the three of us that could be heard across the river. If we weren’t excited enough yet, this put us over the top.  One more run under the boat, heading directly toward the prop causing a little panic, but then back to the surface as I gently layed the net under his head. Just as I told Claudio “He’s in the net..” he let out 5 years of anticipation in a cry that could surely be heard in Switzerland by his father. The photo below captures his elation. First King for Claudio, first on Doc’s boat, and first for the Captain this season–an opening day I’ll never forget.” 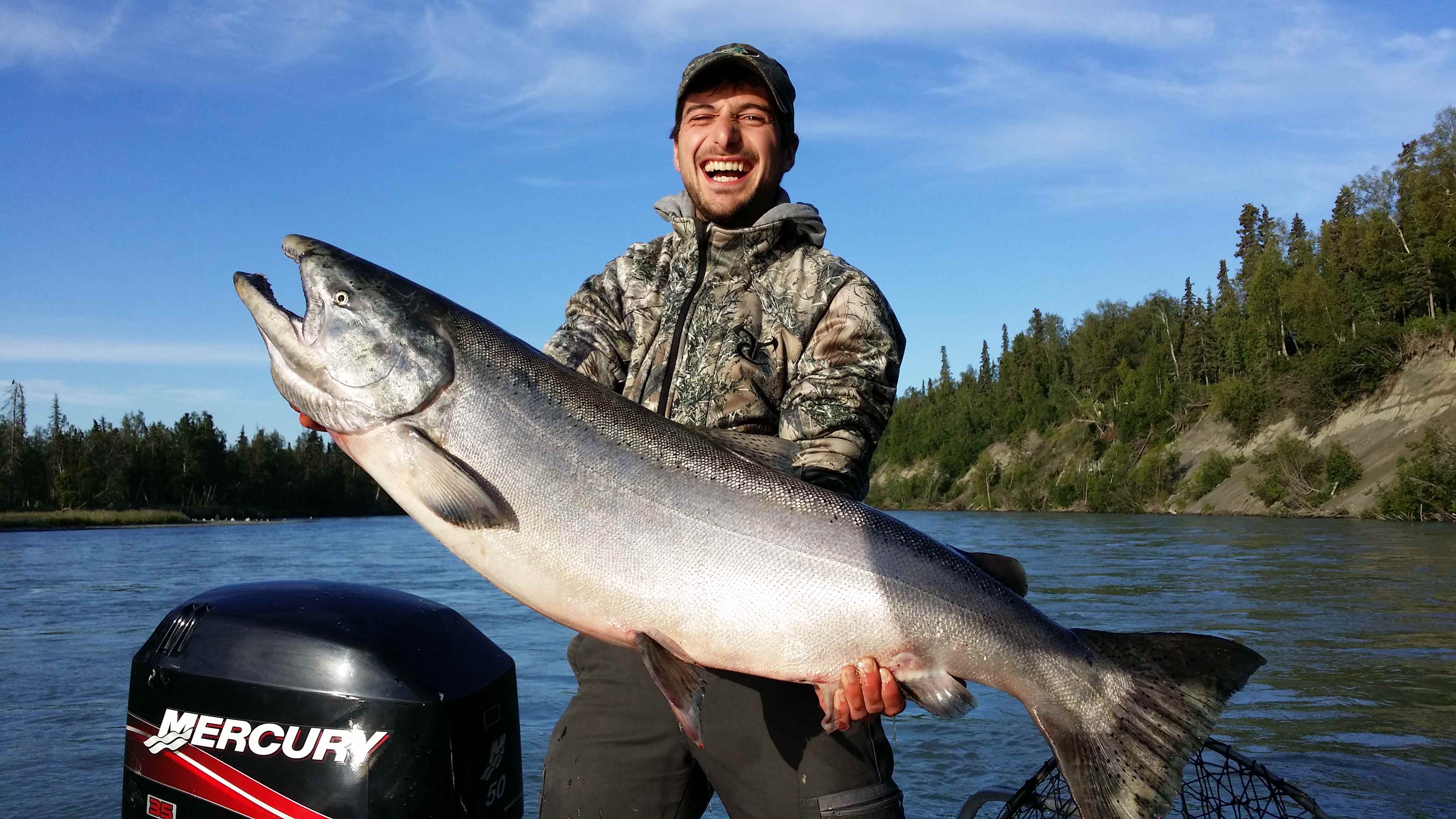 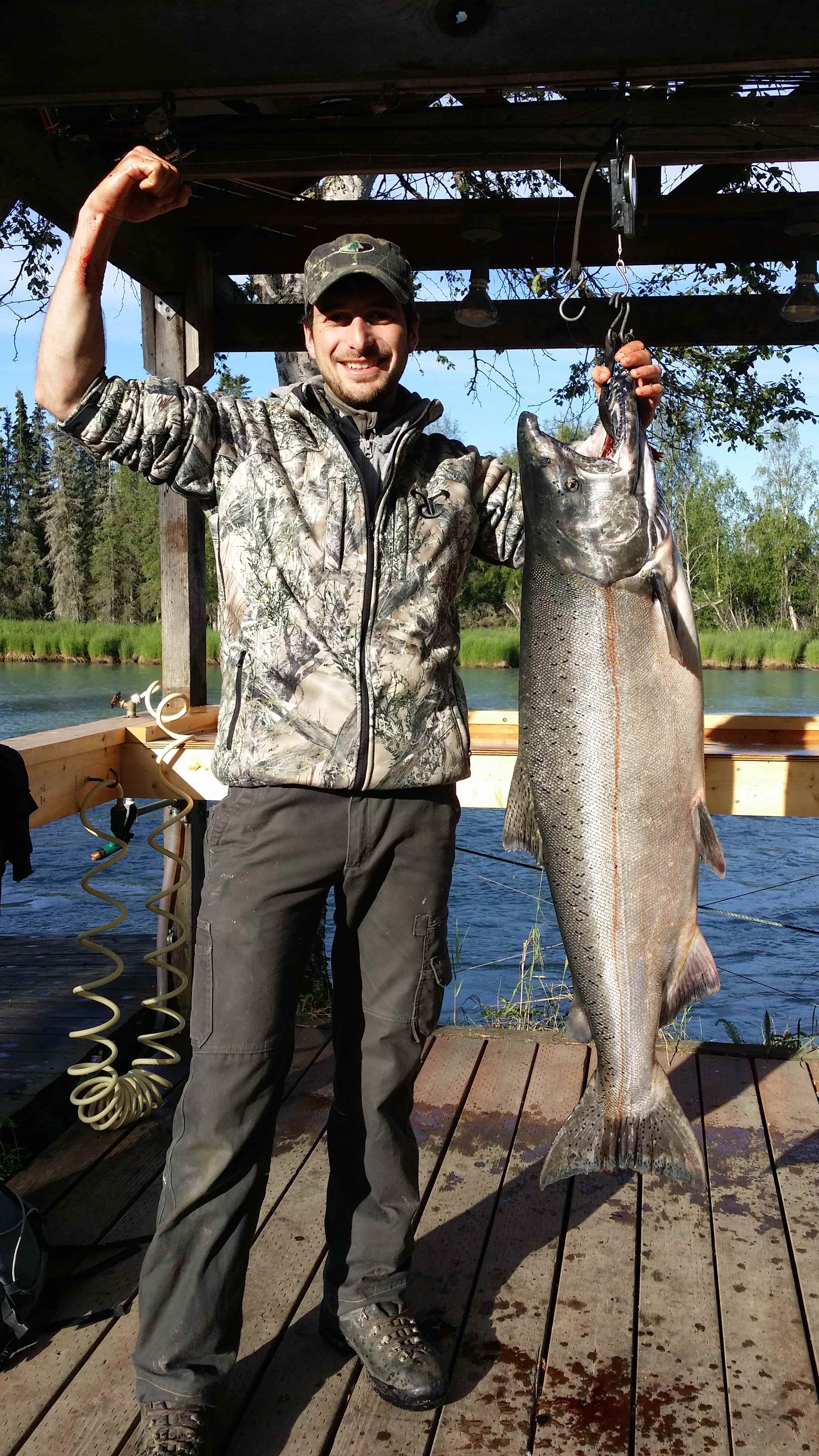 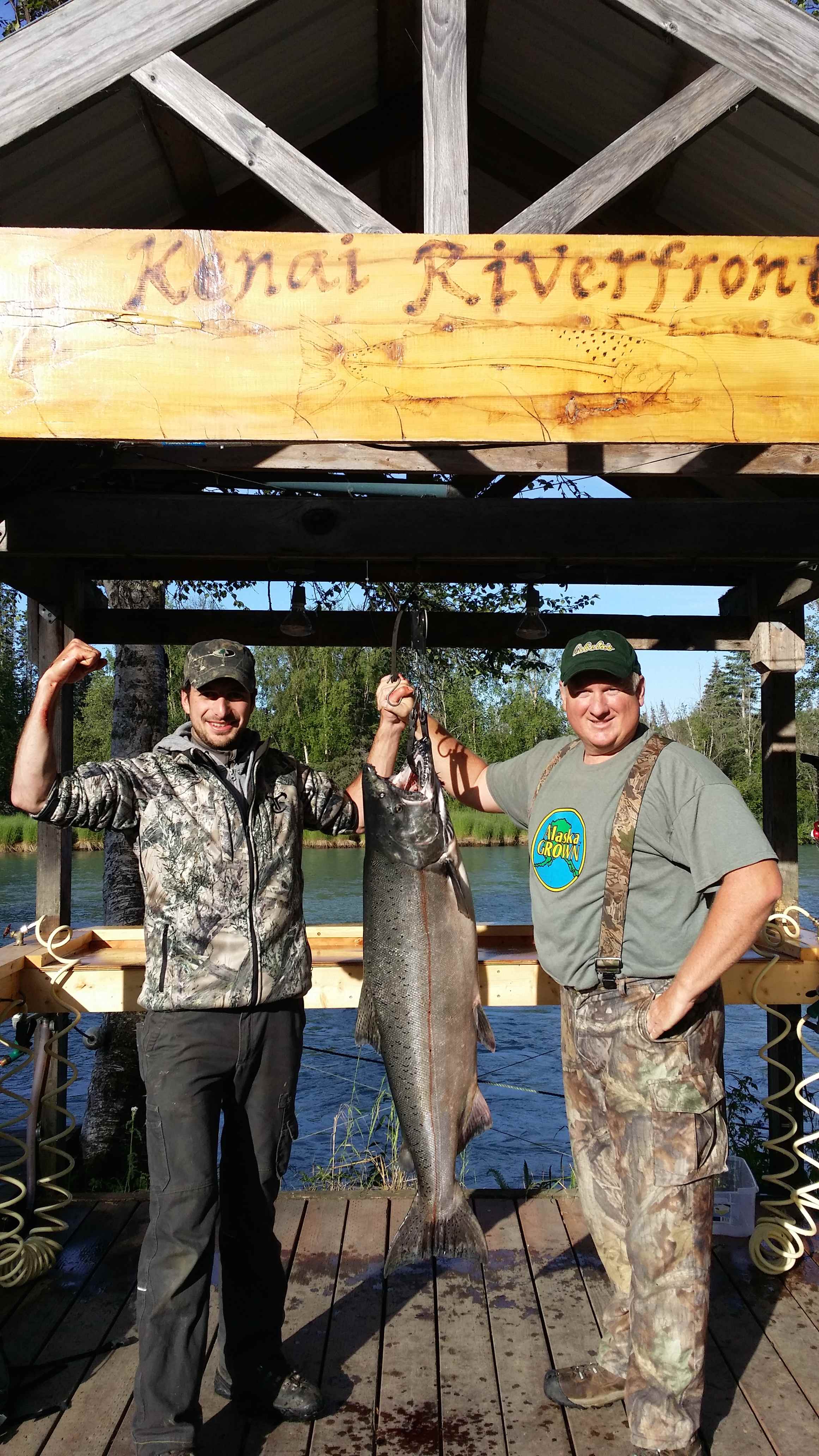 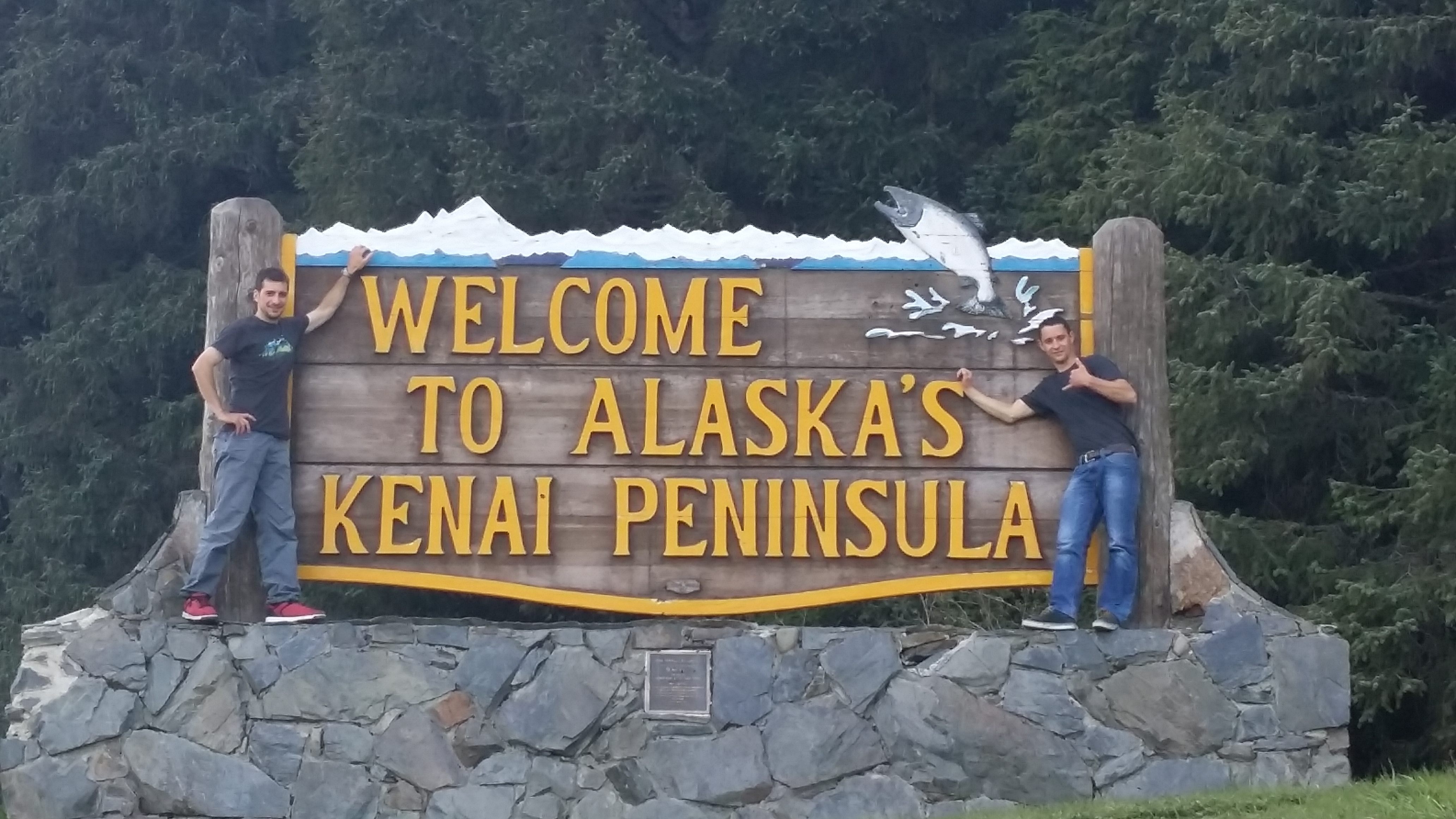 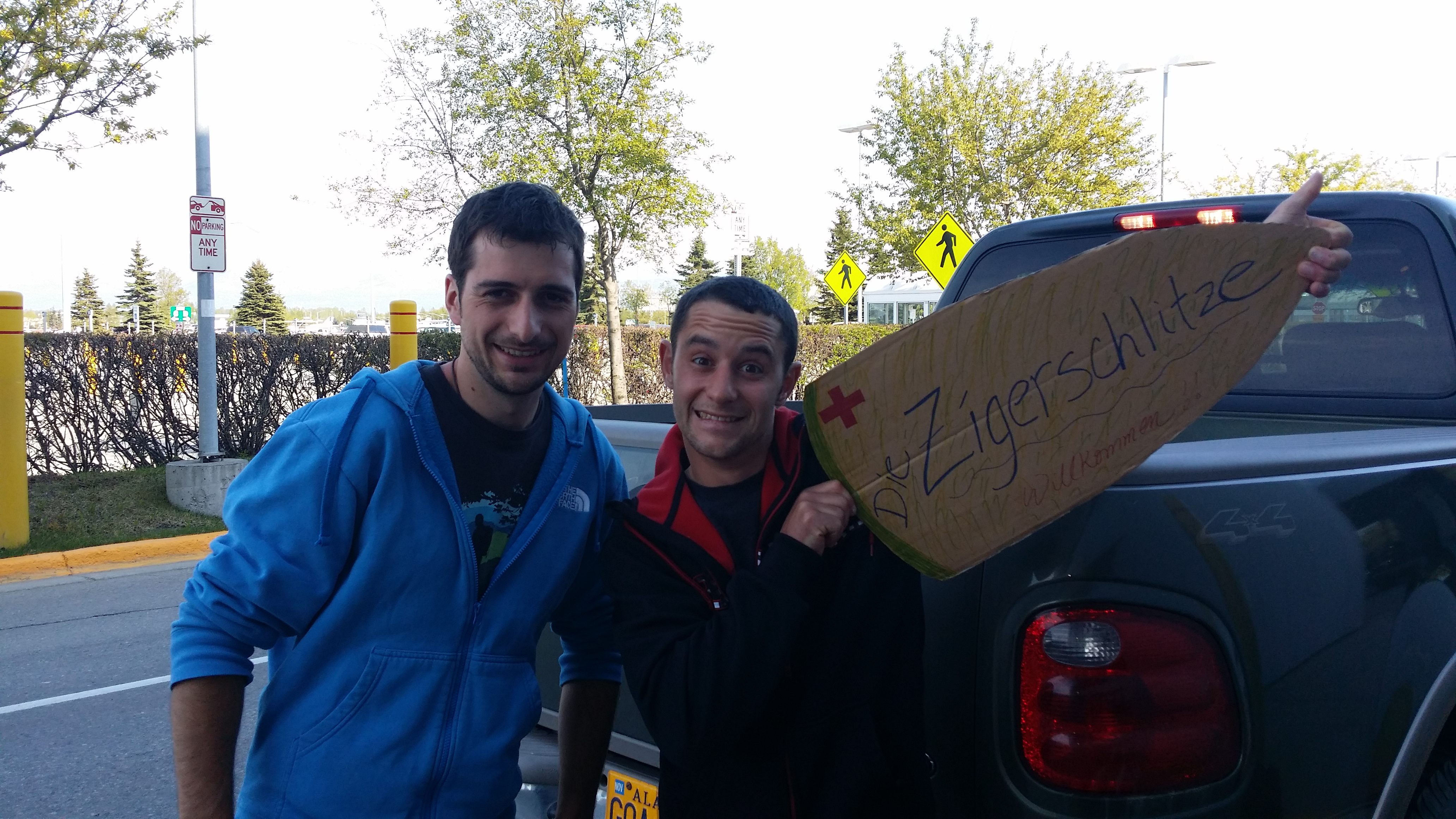 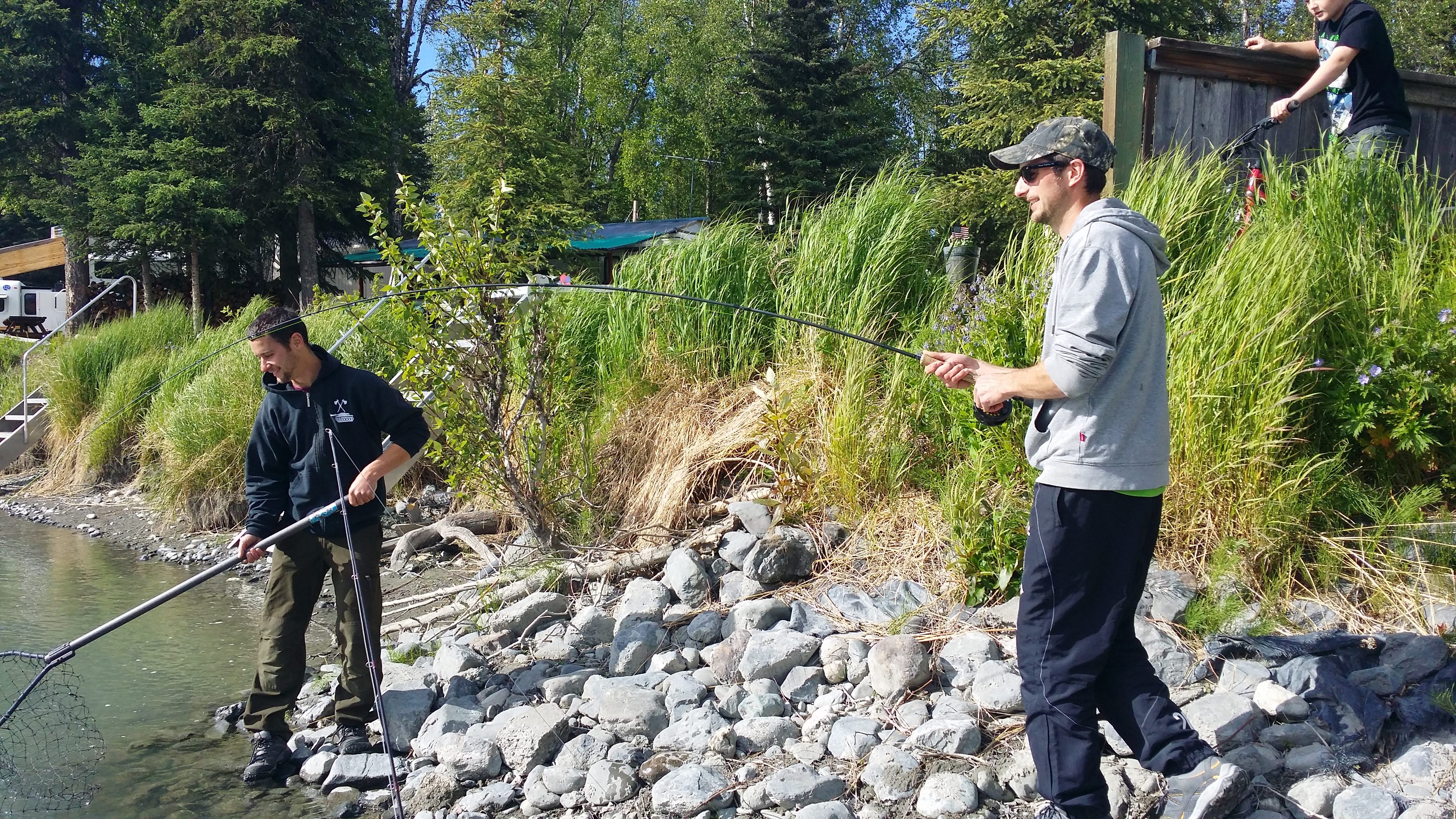 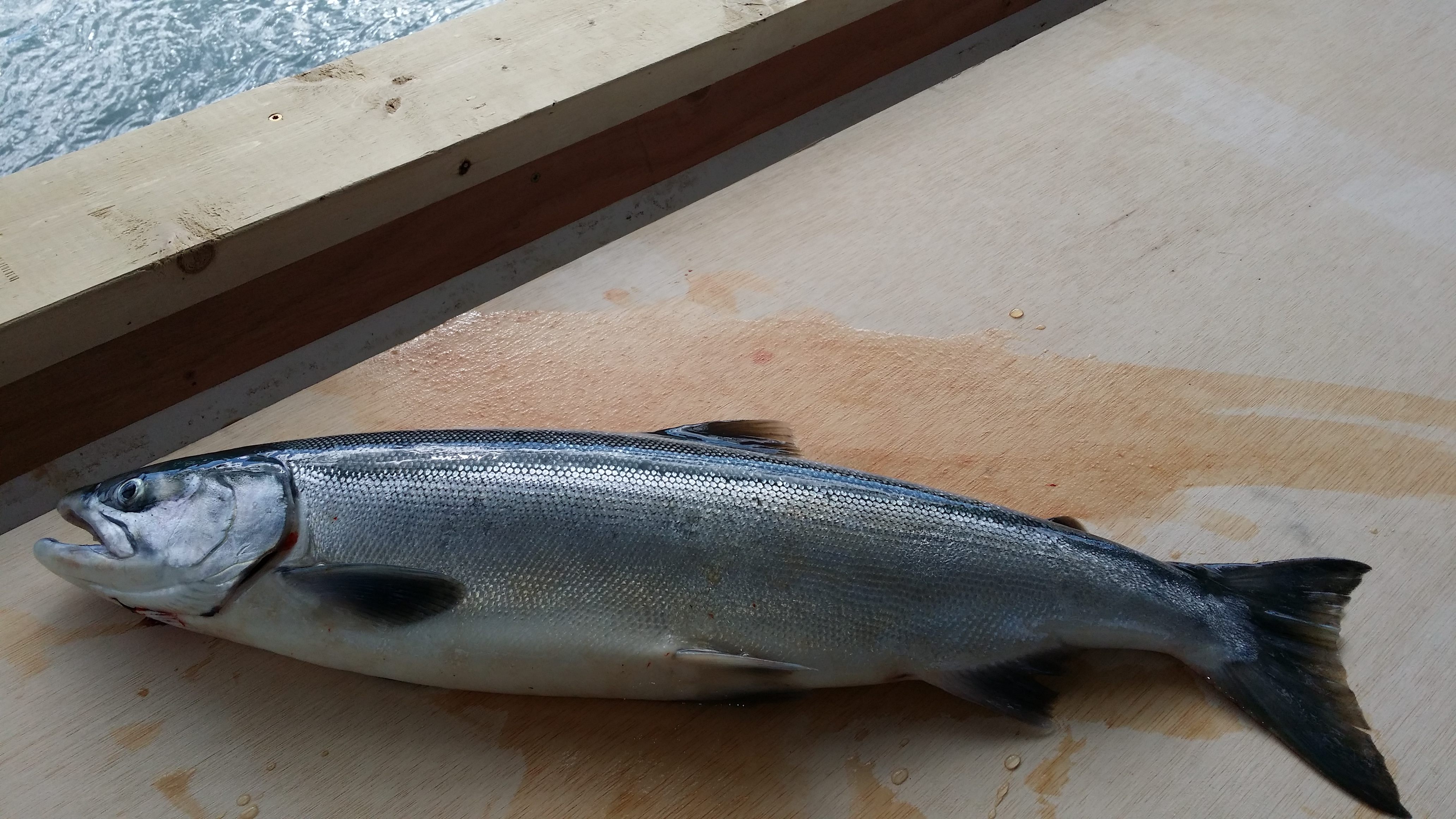 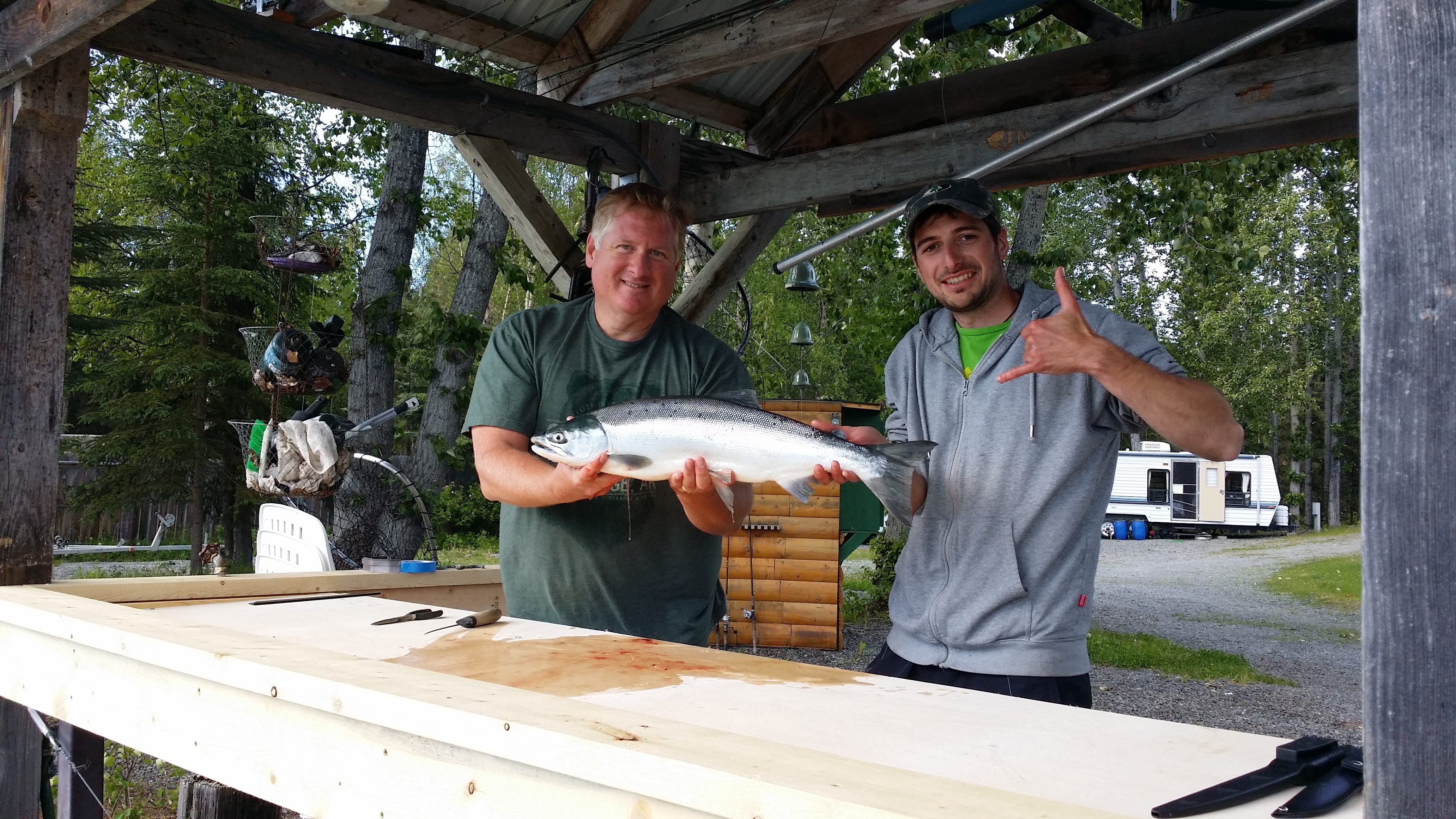 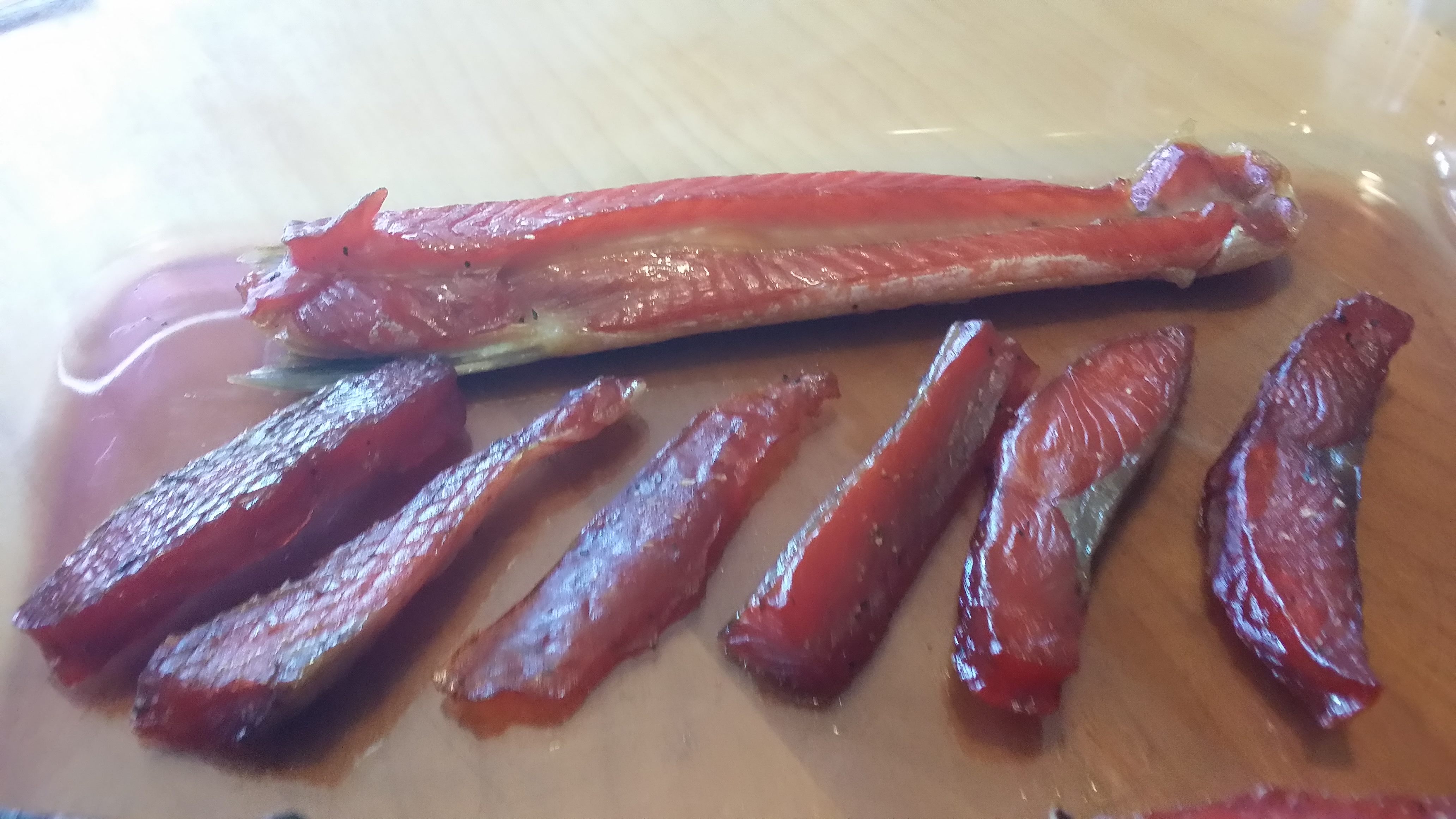 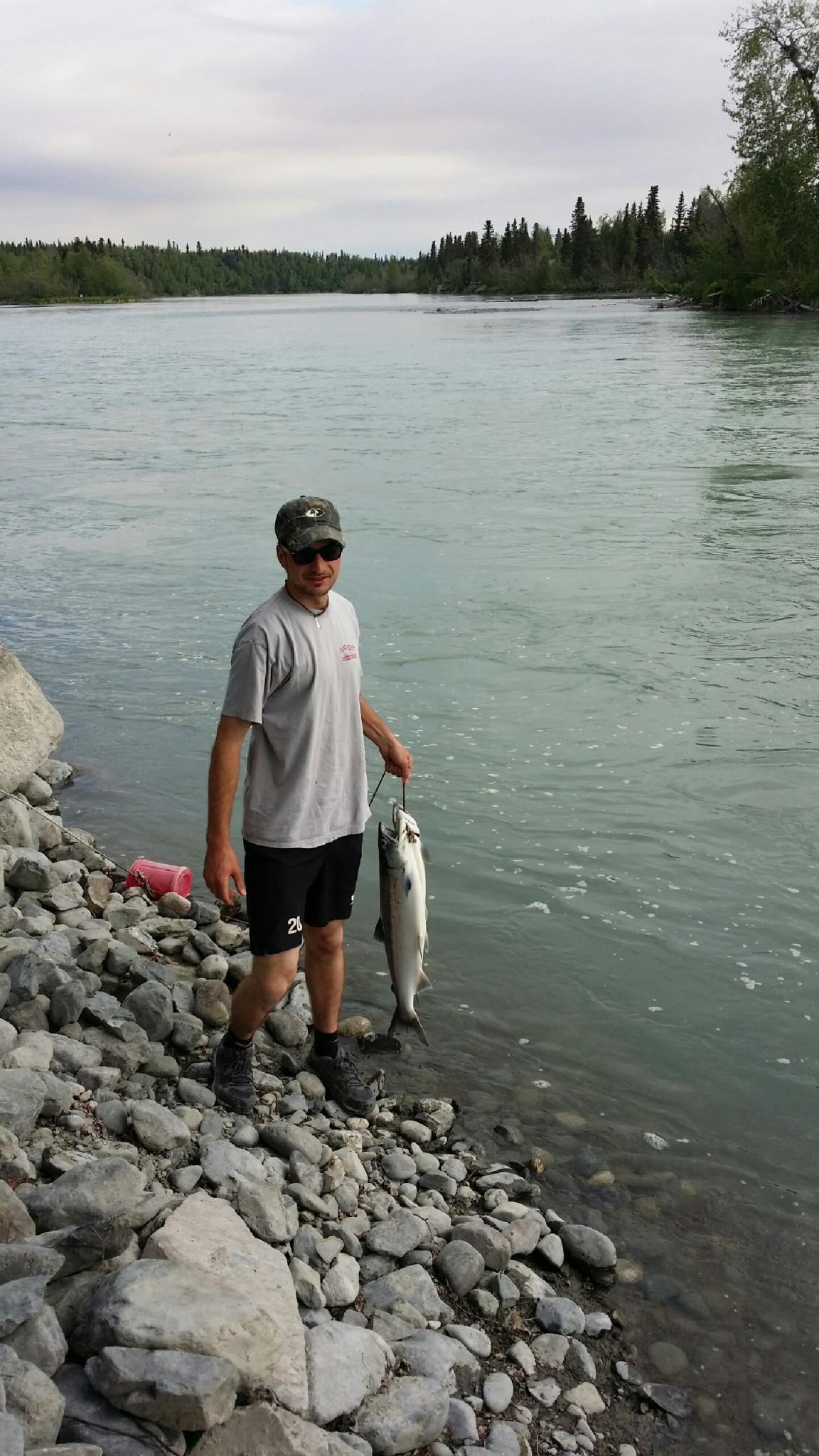 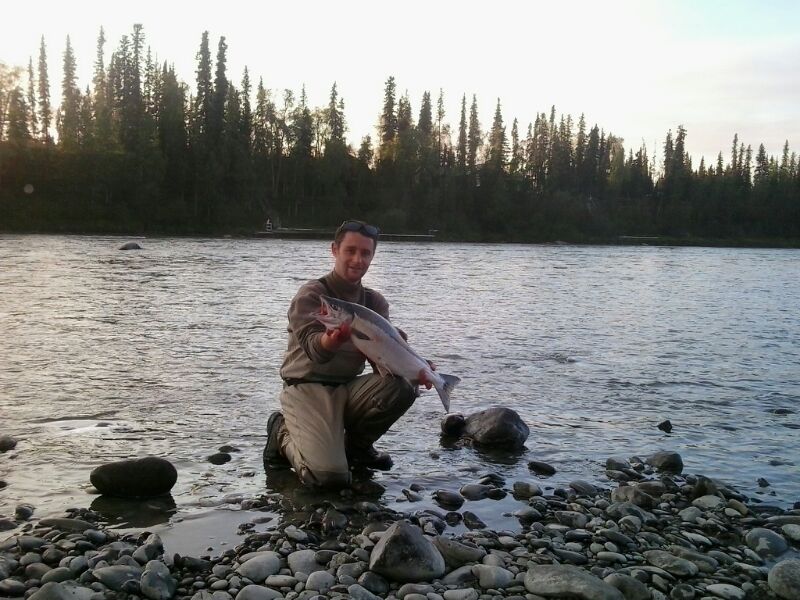 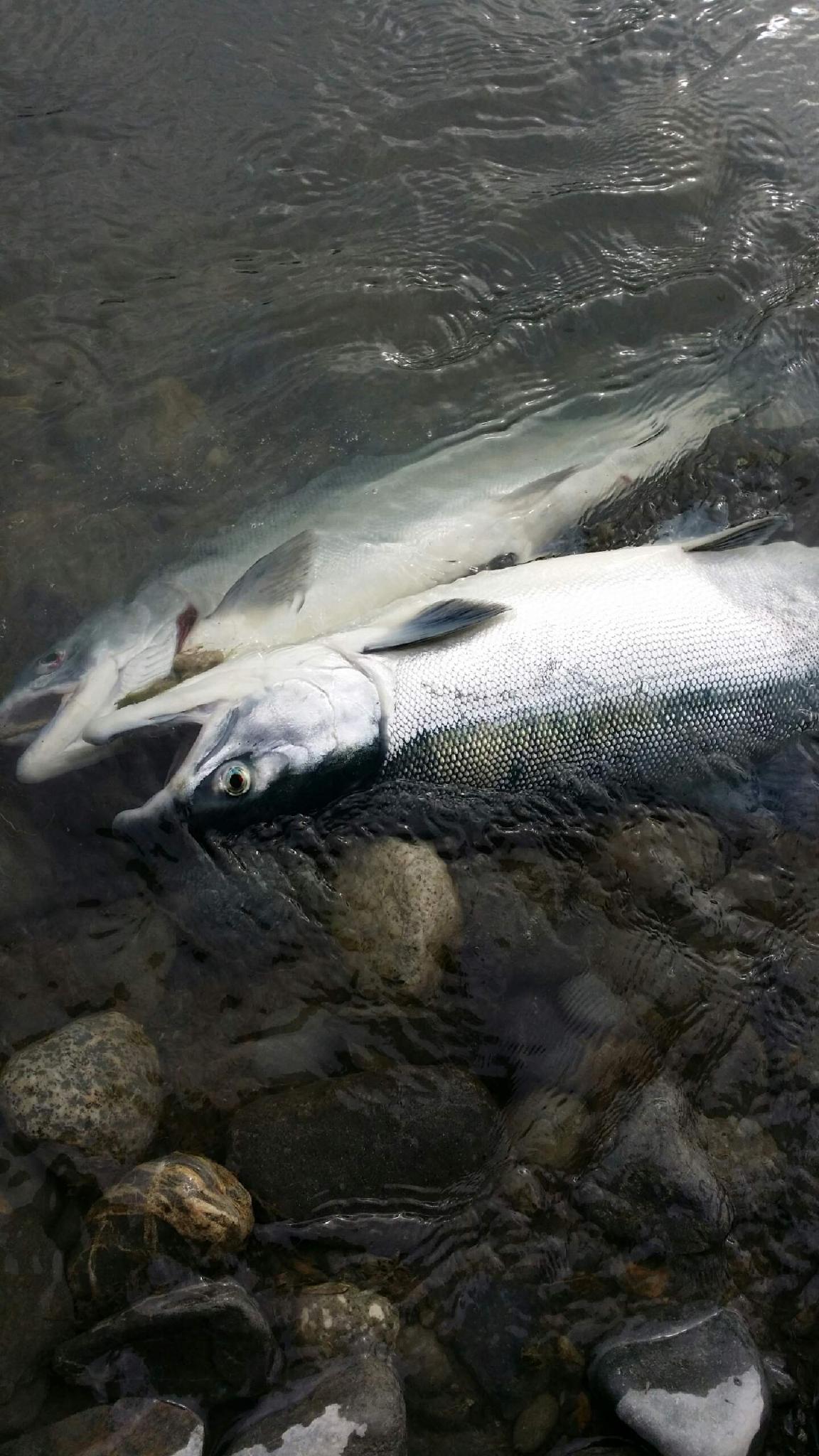 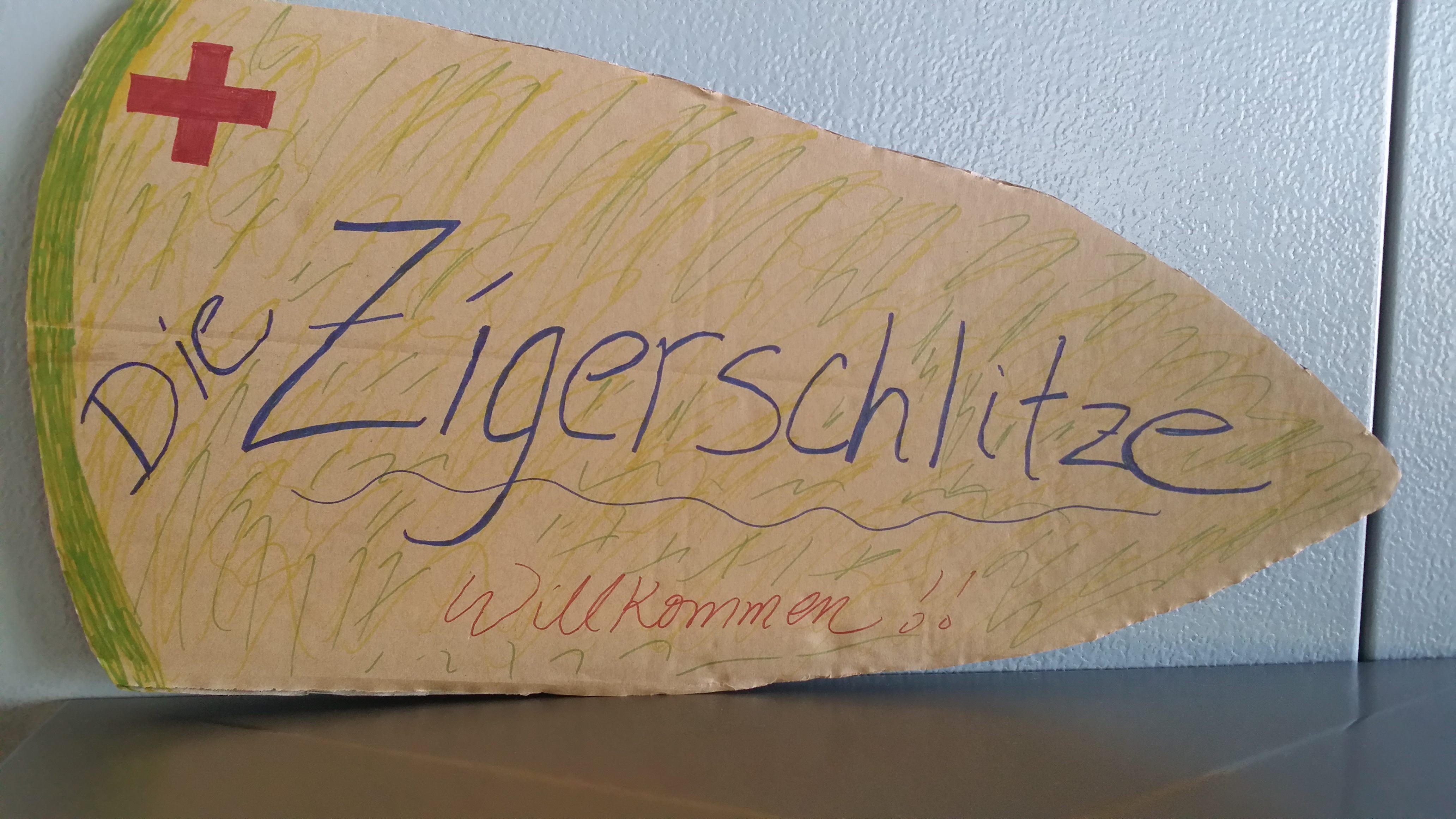