Running of the Reds!

"...it's that time of year once again, time for the annual running of the reds, the migration has begun and it already looks like a repeat of 2011 when we saw 1.5 million flood into [...]

"...TJ & CJ were on the water today bringing luck our way with two nice hookups on our buddy Scott's boat, on one of the first trips of the season.  The first King one was on the [...]

“…since around the age of six these two Alaskan/Canadian gals have been best friends…and when it’s summertime in Alaska best friends like this definitely fish together!  Forget about all those stereotypes, these girls are the real deal when it comes to fishing & friends.  One hooks up, the other nets, one bonks, the other bleeds…you have to be there to understand, but Alli & Glori have been doing it like this for years, and nothing makes their Papas prouder…oh and their Alaskan Mamas prouder too of course!” 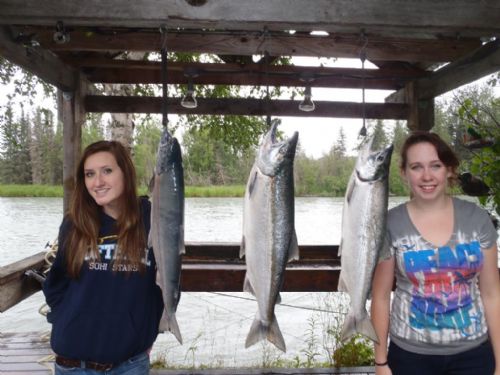 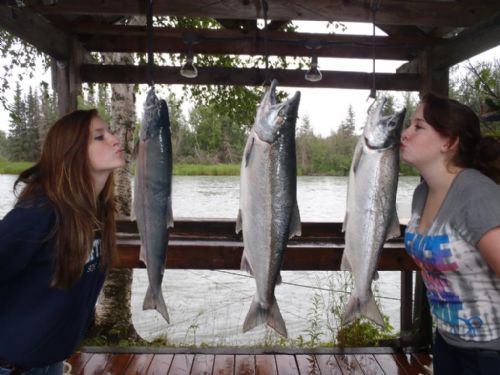 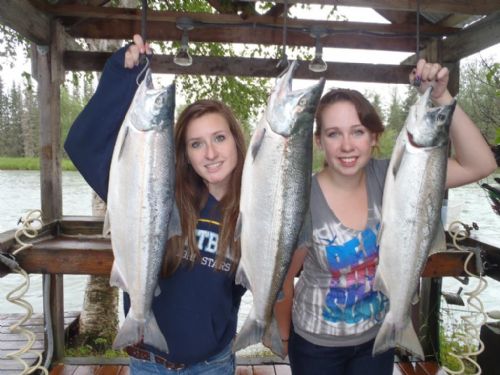 “…with day after day of incredible fish counts, we called our friend Steve and his son Michael, who were busy at work in the best Pizza restaurant in Seward, if not all of Alaska (tell them we sent you when you visit Eureka Pizza in Seward), to come for a quick day of fishing so they could share some of this Kenai bounty with their family back home.  With a little coaxing, we got them to drive the hour and a half, and in less time than that they had their first fish on the line, and soon on the stringer, father first of course to set a good example for his smiling son.  This being young Michael’s first sockeye salmon fishing, at age 13, it took him a little longer, but not much, to get the technique down.  Here he is proudly holding his first ever Sockeye Salmon, a huge buck that hooked him as much as he hooked it!  By dinner time, this father & son had a stringer full of memories they won’t soon forget.” 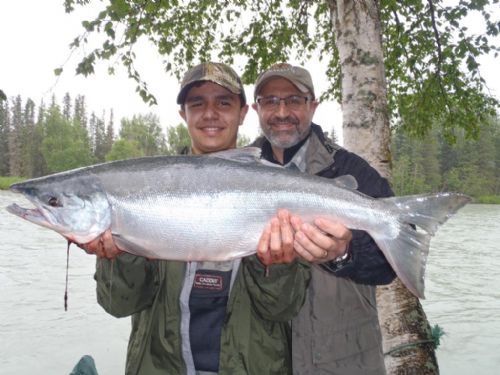 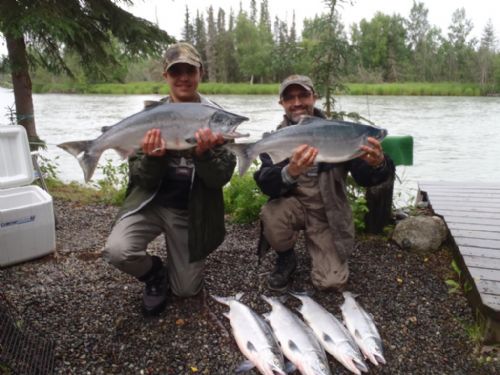 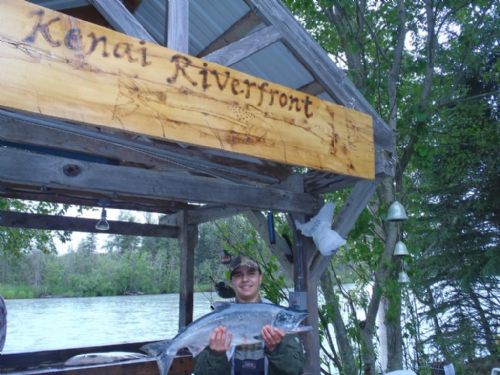 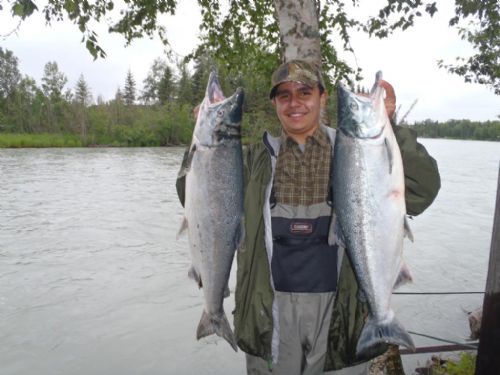 “…if I could fillet them as fast as they catch them I might let them fish all evening and into the morning, but after 9 fish by the stroke of midnight and 10 before breakfast, my fillet grip was starting to feel the burn.  17 fish filleted, processed, brined for smoking or packed for freezing, followed by a Sunday evening salmon bake with friends!  Summertime in Alaska…” 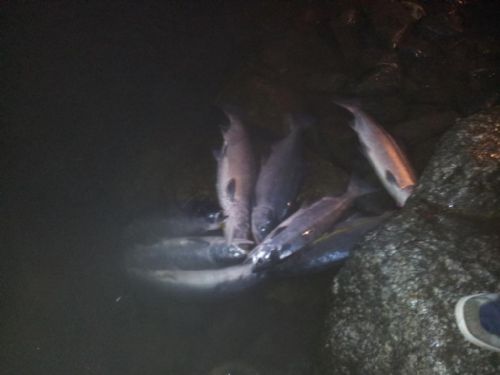 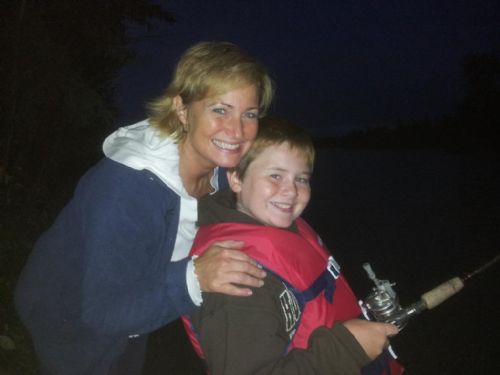 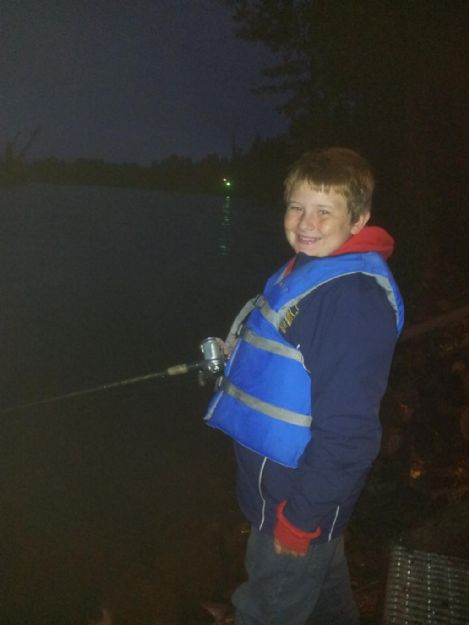 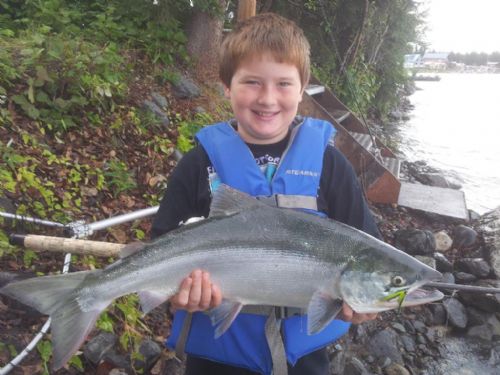 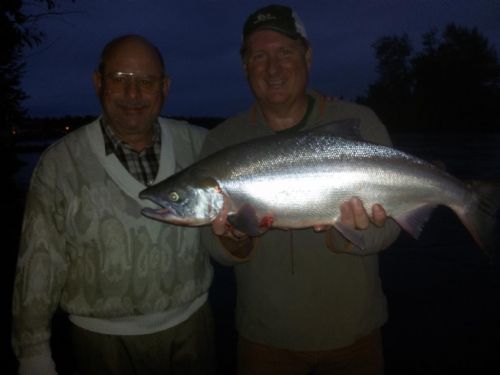 “…much akin to the monster red run of 2011, the July run of sockeye has hit the Kenai like a rampage…both in terms of fish and in terms of fishermen, of course!  We’re seeing daily limits for nearly everyone that wets a line here in camp, and the fish are fresh & bright, with good size to many of them as well.  Here’s my first of the season, a late start, but you know how the saying goes…” 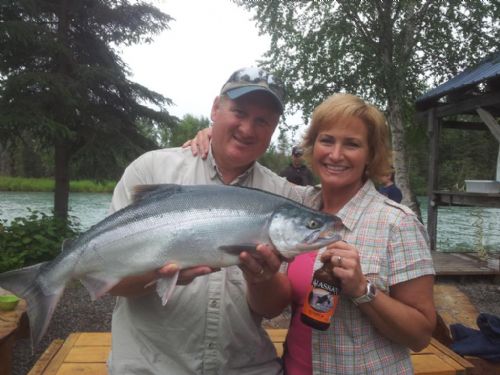 “…this summer is shaping up to be a strange one for sure.  For the first time that we know of in the past 30+ years, the July run of Kenai Kings is closing, two weeks early.  The trawler fleet that fishes the Bering Sea & Gulf of Alaska have taken a major hit on this wild & world famous fishery by incidental catches of Kings, which peaked at 122,000 Kings just in 2007.  We’re all paying the price for that now with weak returns of King Salmon in every corner of Alaska.  It will take some time for the fishery to recoup, and in the meantime we all pray the fishery managers make the right decisions to protect this incredible resource.  On a positive note, the red salmon are entering the river in force, and on our first & last trip of the season for Kings, just before they closed, we hooked two sockeye on King plugs, an anomoly that shows they do strike sometimes.  Cooper also hooked one small King that we gently released back into the river.  That was the only King our family saw this year, and like many we miss both the great fishing and the great flavor of our beloved Kenai River King Salmon.” 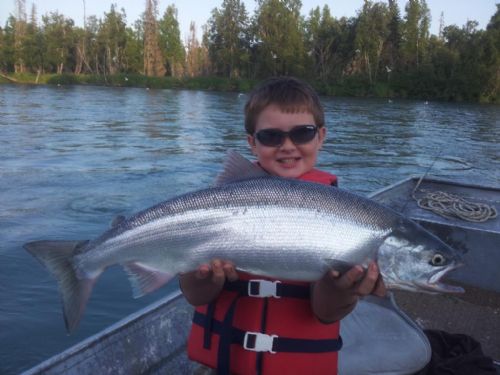 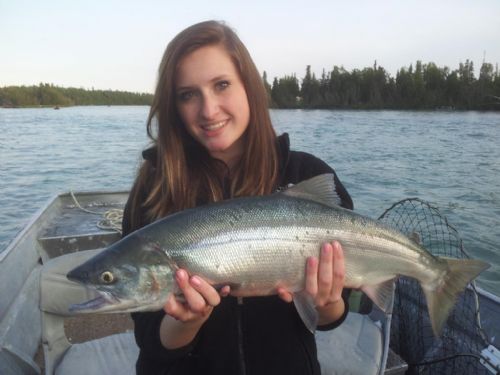 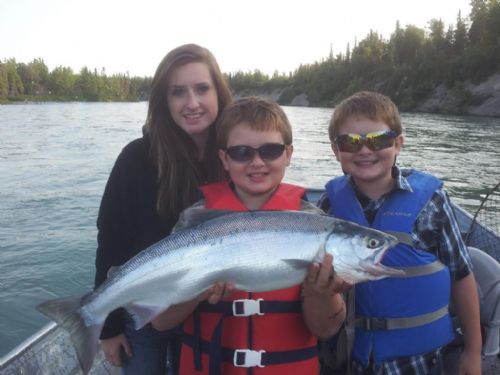 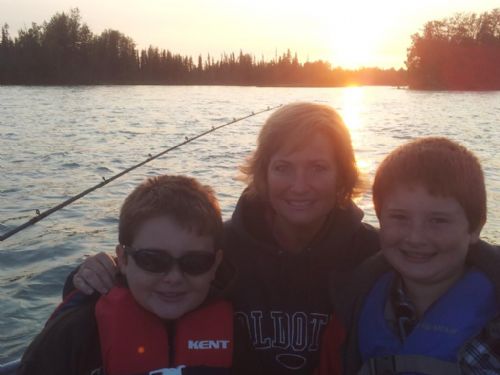 “…it’s that time of year once again, time for the annual running of the reds, the migration has begun and it already looks like a repeat of 2011 when we saw 1.5 million flood into the river between July 1st and August 10th.  This year, and possibly a career best, CJ, aka J2 or Cooper Nelson, at age 11, landed the first family Red of the season, catching this beauty on his FIRST cast, plenty of witnessed verified!  TJ, aka J1 or Taylor Nelson twin brother wasn’t but a few minutes behind with his proud catch!  Before this first taste of summer salmon fever season was over (less than an hour or two), Cooper had caught 3, Taylor had landed one but after multiple hookups, Alli hooked into a baker’s dozen, losing a couple close to the rocks and one that nearly spooled her before she landed her prize, and Mama, well you know how it goes, Mama never let’s us down!  This is the year of the family-fillet-academy, so everyone (except Alli who volunteered for chores instead) filleted there own…even that wonderful Mama!  Nice work team Kenai Riverfront, now go enjoy some salmon schnitzel and cajun smoked sweet salmon!” 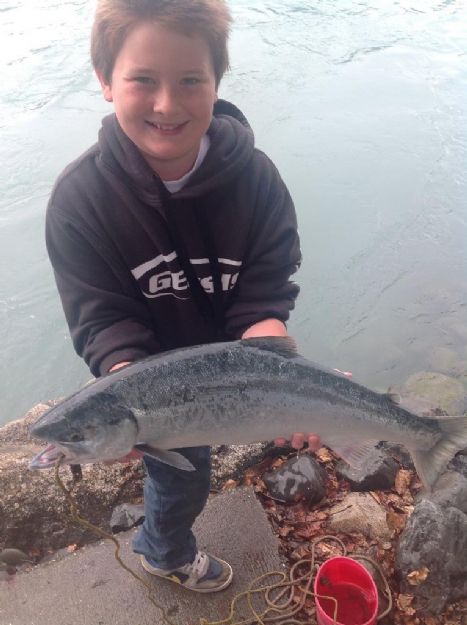 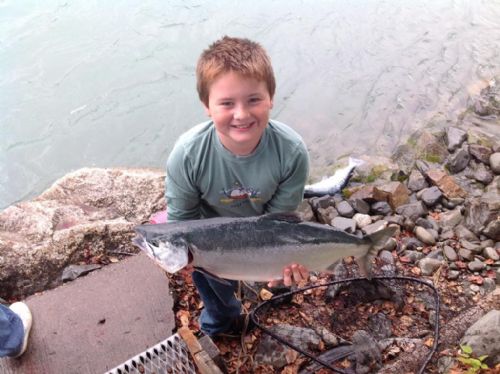 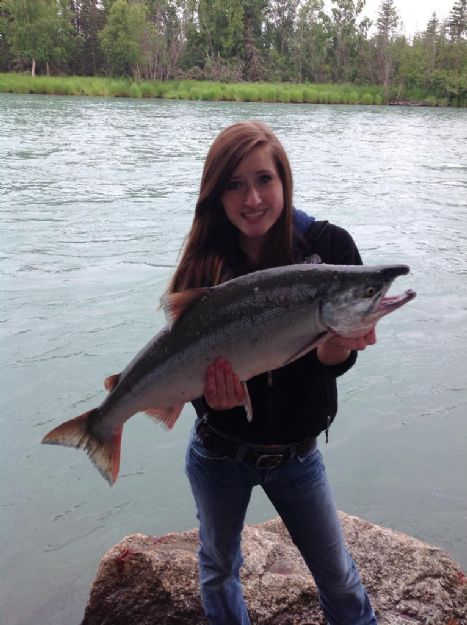 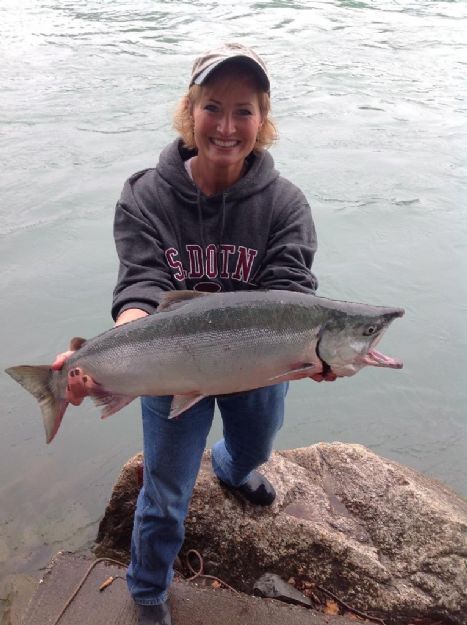 “…TJ & CJ were on the water today bringing luck our way with two nice hookups on our buddy Scott’s boat, on one of the first trips of the season.  The first King one was on the big side of the 46″ slot, released by the side of the boat before we could even get a photo, but on the very next pass TJ hooked this good eater and we enjoyed our first King Salmon dinner of the summer.  The water is clear & green, a little on the shallow side still, but there’s lots of good fishing ahead, summer has just begun.” 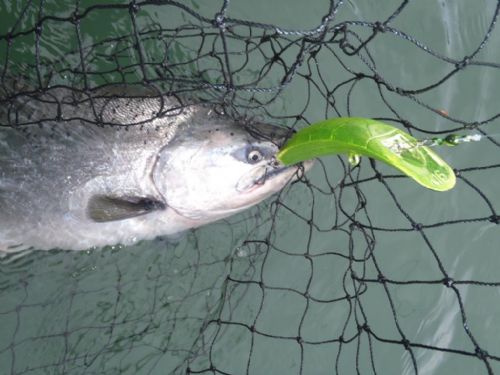 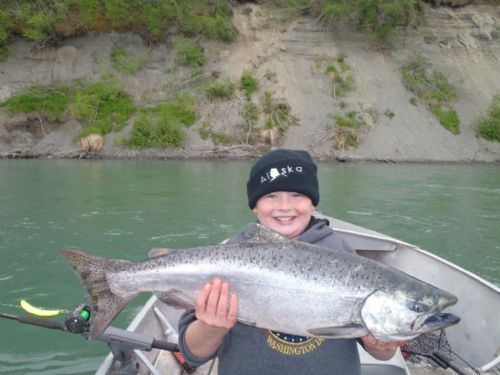 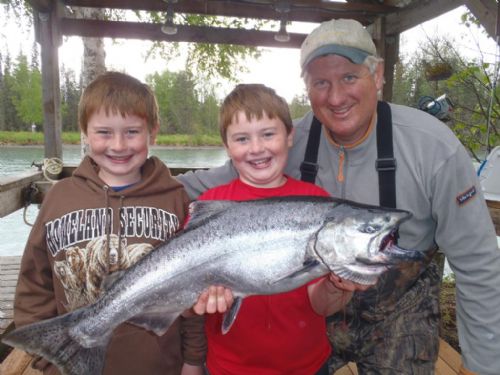 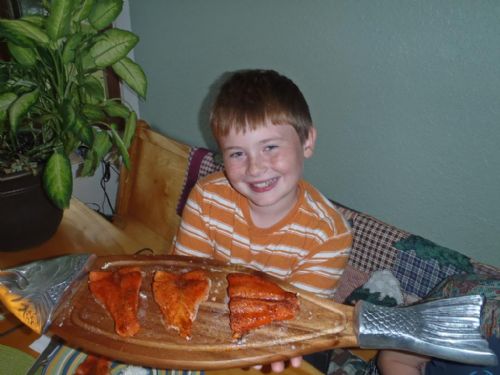